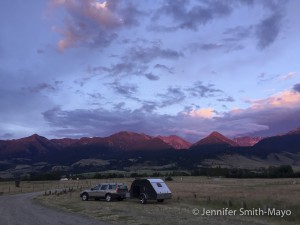 Ole and Goldie chill out below the Absaroka Mountains at the Loch Leven Fishing Access, Paradise Valley, Montana

This summer Team Gritty set off on a rip-roaring research trip from Maine to Walla Walla, Washington, and back again (all told, we clocked 6,994 miles!). And our big news is that we have added a new adventure mobile to our team: a TC Teardrop 5×10 camper.

Since we sold the Tiger last winter we’ve been looking for a small camper that we could tow with our Volvo XC-70 station wagon, Goldie. This little fellow weighs about 1300 lbs, tags along like a dream, and sets up in minutes: Just park the car, unhitch, throw a couple chocks under his wheels, and that’s it, we’re ready to hit the trail! We named our camper Ole (sounds like “rollie” and “holy moly!”)  because he was born in Wisconsin and we wanted to give him a Norwegian name … and he reminds us of a little elephant (as in “oliphant”….). Ole sports two cabin doors, a queen-sized bed, lots of storage cupboards, LED lighting throughout, 12-volt power in the cabin, 12-volt fans and a heater, a super handsome head-turning galley in the rear, a solar panel that trickle-charges a beefy marine battery, an off-road axle, and a whole lot more. Ole keeps Team Gritty, dry, spry, charged, and ready for action!

Folks cool off with a swim in the Serpent River, Ontario, Canada 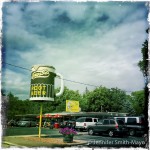 While planning our route West, we decided to skip driving through the busy eastern and Midwestern cities as much as possible (and avoid the pot-hole riddled eastern U.S. highways … and their dang pricey turnpike tolls). Our route took us from Maine north into Quebec, Canada, then west through Ottawa to Michigan’s Upper Peninsula (the UP!). What we loved about traveling through Canada: pretty scenery, relatively quiet roads in good repair, and the chance to tuck into one of Guy’s favorite dishes, poutine (in fact, he did a pretty impressive headfirst dive into a big platter of those tasty French fries and squeaky cheese curds smothered in hot brown gravy, giddy-up!). 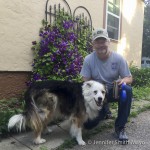 Mean Pete with his pard, Miss Syd, in Minnesota

From the UP we crossed into Wisconsin, purchased our camper, then visited the friendly folks at TC Teardrops in Wasau, where we outfitted Ole with a couple more accessories (spare tire, second 12-volt fan). We continued our journey West to Washington, stopping along the way to visit our friend, writer Mean Pete, and his lovely sidekick, Miss Syd, in Minnesota.

In South Dakota, Team Gritty spent a blistering but breezy afternoon wandering the prairie at the Laura Ingalls Wilder Homestead in DeSmet. A great historic place for anyone interested in finding out more about the infamous Little House on the Prairie author, the Homestead also offers kids (adults, too!) lots of hands-on pioneer tasks to tackle, and Team Gritty rose to the challenge. We learned to make rope, ground wheat, pumped water with a hand pump, and made a corn-husk doll using the antique corn sheller. And then we went to school….

We tucked down into Nebraska for a while and hugged the northern scenic edge before making our way north to the Black Hills of Deadwood, South Dakota. Deadwood bustled with tourists and gamblers hoping to hit the motherlode. Team Gritty held tight to our wallets and passed on the casinos, opting instead for the Adams Museum, where the real treasures to be seen were on display, such as Potato Creek Johnny’s leg-shaped gold nugget, the mysterious Thoen Stone, and the one-of-a-kind remains of a dinosaur, a marine reptile called a plesiosaur. After a lunch and a refreshing libation (or two), Team Gritty hiked up to Mount Moriah Cemetery to visit the graves of some of Deadwood’s most famous residents—Wild Bill Hickok, Calamity Jane, and Seth Bullock, among many others. As we walked up the steep hill to Bullock’s grave, a fast-moving storm blew in and pelted us with driving rain and pebble-size hail. Caked in mud and grit and sopping wet, we walked down the hill and stopped at the graves of Wild Bill and Calamity Jane. The sun broke through the clouds and a tourist bus let out just below us. A few spotless people averted their eyes as we made our way back the lane to the visitor center, smiling and trailing muddy footprints along the way. Ha!

While hiking one of the trails at Devils Tower National Monument, Wyoming, we spied a massive lightning storm approaching from the northwest. Before the first big raindrops hit, we hightailed it back to the camper and drove down to the campground. We looked for an open site, but the only spots left were designated handicapped and we didn’t feel right about occupying one of them. Then the storm hit, so we said to heck with it, we’re not driving in this rank weather, and we parked in the parking lot. We climbed into Ole, opened the camper door overlooking the Tower, and watched as the haunting light show began. Six rock climbers were trying to descend the laccolith—we saw the tiny lights of their headlamps moving in the inky nightscape, and heard their voices between the wild wind, lightning cracks, and booming thunder. The next morning we chatted with a rock climber and he said that a couple of the climbers’ rappel ropes got hung up on cracks during their descent, so they all had to spend the night up there until help arrived in the morning. Must’ve been quite a view from up there…. 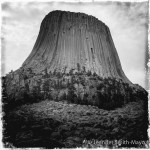 Viewing tubes give a glimpse of historic wooden stake ladder in a crevice at Devils Tower National Monument, Wyoming

A look through the viewing tubes gives a glimpse of historic wooden stake ladder in a crevice at Devils Tower National Monument, Wyoming

We crossed into Montana and spent the afternoon at Little Bighorn Battlefield National Monument. In the big, blue sky, puffy clouds raced high above hundreds of scattered white headstones that marked the sites of fallen Native Americans, soldiers, scouts, and horses. Along the interpretive walking trails, the vast prairie stretched in every direction and provided plenty of space for introspection and reflection on our nation’s past, present, and future.

Team Gritty continued our mosey through Montana, then crossed into Idaho’s Bitterroot Mountains by way of Lolo Pass and the Clearwater National Forest. Of all our travels to date, this national forest is at the top of our list and, by gum, we can’t wait to return. We walked among majestic cedar trees, hiked along small feeder streams of the Lochsa River, and watched native baby cutthroat trout chase bugs. We visited the Lochsa Historical Ranger Station, picked huckleberries and blackberries (and didn’t have to engage in fisticuffs with any bears, either!), camped along the river at forest campgrounds, and met fascinating people with lots of stories to tell—a few even shared super-secret fly-fishing spots with us (which we’re keeping under wraps ’til our next visit).

Golden wheat fields stretched in every direction as we drove the final leg from Lewiston, Idaho, to Walla Walla, Washington. We spent a couple of days doing research for an upcoming project at Fort Walla Walla Museum, and nearby Whitman Mission National Historic Site and Frenchtown Historic Site. At the top of the hill by the Whitman Memorial, we saw plumes of smoke from forest fires in the distance. One night we camped a few miles south in Oregon and were surprised when campground hosts told us, per county park rules, we could make a campfire if we wanted to (we didn’t), even though a forest fire was burning just beyond the ridge behind us.

Guy fights his way out of a bear’s jaws of doom at Charles A. Lindbergh State Park in Minnesota

Originally we planned our return trip back to Maine via Glacier National Park (where we spent much time last summer), into Canada, and then we’d follow border roads to Maine. That didn’t quite work out because the east side of Glacier caught on fire as we were getting ready to head up there. So we rerouted and drove northeast to Michigan’s UP, where Team Gritty spent some time dipping our toes, fighting off vicious biting flies, and looking for shipwrecks along the Lake Superior shore near Whitefish Point Light.

We crossed the Canadian border at Sault Ste. Marie and cruised down to the Northeast Kingdom of Vermont to visit with family before we returned home. We’ll just have to save a return to Glacier for next year….