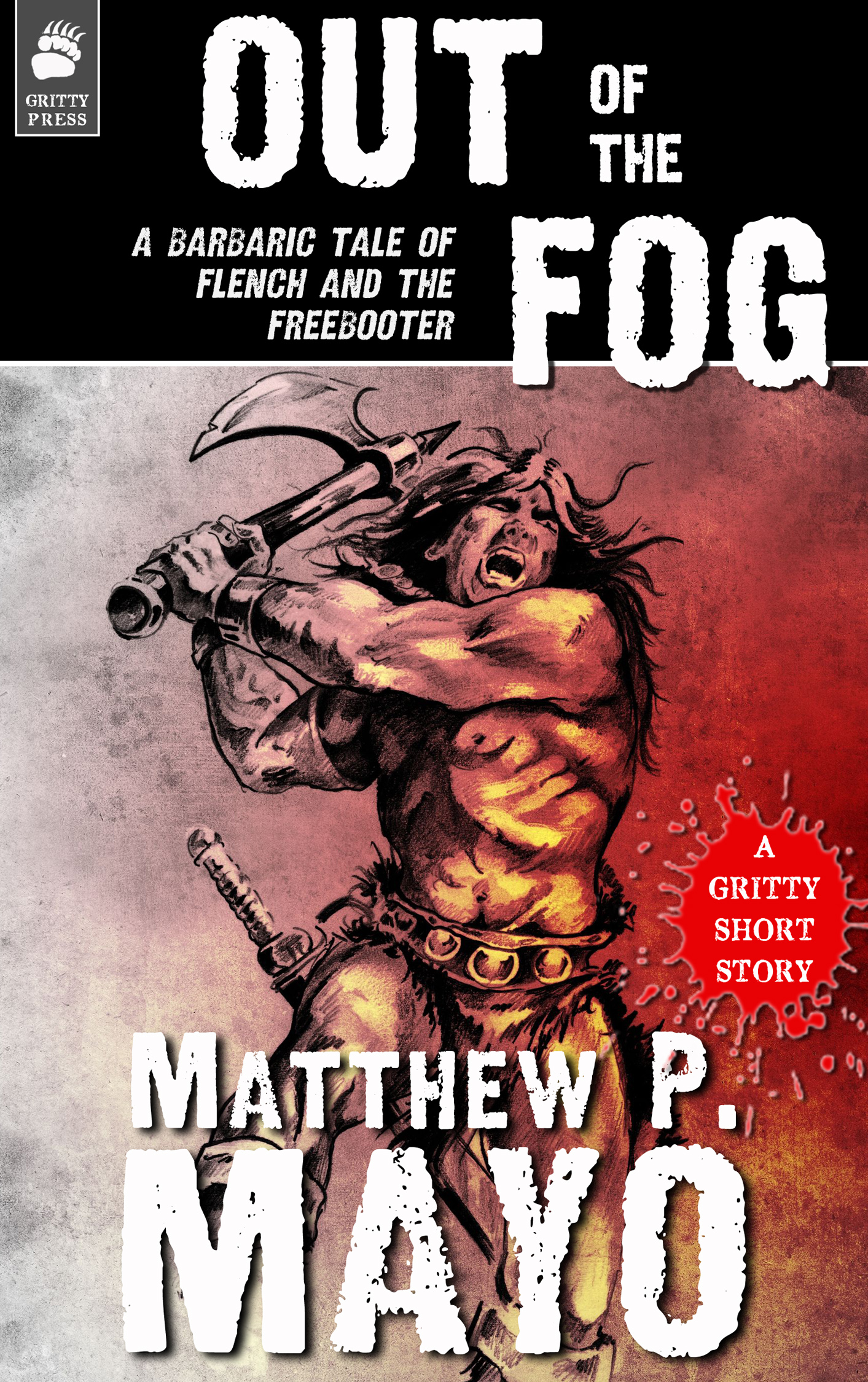 OUT OF THE FOG

A BARBARIC TALE OF FLENCH AND THE FREEBOOTER

“What a morning,” Flench grumbled. “Can’t tell a cat from a dog, the fog is that thick.” No one was yet on the street. With each pulling step, the thick ooze of the narrow lane wormed between his toes through the holes in his wraps. Surely, no one would begrudge a beggar respite from the mud at so early an hour. He angled toward the higher cobbled walk under the eaves of the street’s shops.

From just behind, a coughing snort and a gout of warm air slapped Flench’s neck like a sopping rag. Something stuck, then slid down his bony spine. A bloated-carcass stink clouded his nostrils. Eyes watering, he crouched and scrambled for the cobbles.

As he slapped at the sliding gob of phlegm with his good arm, he gritted his remaining teeth and snarled, “By all that’s—”

From what he could see of the beast as it sauntered past, it stood half-again taller than any horse from the village, or indeed from any of the domains bordering Carana. And the man upon it, though Flench saw only a lower leg, bare but for mid boots of worn, thick leather and ringed with protruding nubs of jagged metalwork, must surely stand a full two heads taller and half-a-man wider than anyone Flench had seen in his fifty-two years. The only other man he could recall of such size was Chancellor Regent Greigle, who at one time had been also been big and rugged, but had since gone big and fat.

In his younger days Flench had spent several years as mucker at the town stables. But that was a long time ago. Twenty years and more. He squinted into the fog. Never had he seen a horse such as this. Covered though it was with layers of creaking, rattling leather and bronze armor, the hide rippled damp and silver in the close fog of this already thick day. A war horse? Here?

Despite his fear, he hurried along the walk to keep abreast of it, then when he was afraid he would lose sight of it where the lane and walk diverged, he stepped from the cobbles and into the thick mud of the street once again.

The morning mist swirled and parted as the horse stopped. A massive fist came to rest on the thigh nearest him. Above it, a battered leather brace, and above that, a scarred, corded forearm. At the man’s knee rose the knurled hilt of a sword from beneath layers of leather armor, well within the fist’s grasp.

Flench’s perpetual gray squint sagged. As he looked up the fog parted to reveal a nearly bare torso broader than a royal guard’s battle shield. A large, sheathed dagger hung from a leather thong about the man’s neck, secured across the chest with straps, and a short cloak of spotted white furs draped his shoulders. The man’s head still wasn’t visible, but such a body sitting atop the high-cantle saddle was enough to freeze the little man where he stood.

The voice seemed to echo off the close buildings. Flench knew it was directed at him but he did not know what to say. He looked to the left, to where the horse’s head was still hidden in the thick mist. Indeed he could barely see the full height of the animal’s withers. How big could it be? The hooves, fringed with dark, mud-matted hair, were like tree stumps sunk in the ooze of the street.

Flench wanted to scamper from the sopping lane, but found he could not move. The rank stink of stale musk, that of a great beast worked hard and left unwashed, rolled and broke over him, so strong he could almost see it, taste it, and he fought the urge to gag.

The horse snorted. The saddle creaked and popped under the man. “What is this place.”

Again, it was not posed as a question but a statement. Yet Flench knew it required an answer. And from him.

He opened his mouth to speak, but it was so dry. He closed it, swallowed, licked his lips, and finally said, “This be Carana. Sir.”

After a few seconds, the man sighed and said, “Then I am not where I want to be.”

The voice, despite its initial tone, was not unfriendly. Just big. Flench swallowed again and said, “I expect we none of us are, come to think on it.”

A grunt greeted the remark. Then, “One place is as another. I require drink. And meat.”

Flench waited for more, but the fist on the thigh remained immobile. This big fellow had a way about him that was both interesting and irritating. Acts like he’s of more value than he ought, considering he’s a stranger and all, thought Flench. He did his best to stand straighter, but years of toil had left his spine a permanent sickle shape.

The mammoth horse stepped in place, its flank twitched, its tail switched. Something about the beast was always in motion. It occurred to Flench that the man was waiting for him to respond.

“You’ll want the Brimmin’ Flagon. End of this street. Tasty brew, they serve there. It’s been a time since I’ve quaffed it myself, of course.” He looked down, frowning as if a rat had just crossed his foot. The man made no response. Flench brightened. “Just beyond is the village stables. Good place. I used to work there.”

“I’ll see you at this Flagon, then.” The man heeled the big horse and the mysterious pair moved on, still in no hurry. Soon they were lost from Flench’s sight in the thickening mist, the receding sound of the massive hooves squelching muck the only sign they had been there.

Flench sighed. “Well, if this one don’t act like lord and master. And we already have one of those, thank you. Who needs another?”

He walked, thinking of the man’s few words, then stopped and rasped a calloused hand across his stubbled chin. “Now Flenchy,” he said in a whisper. “Another one—no, no. But a different one. … ” Flench laughed, working his bony shoulders higher, and closed his flapping coat with his good hand. He straggled through the mud toward the Flagon and soon disappeared in a swirl of fog.

What happens next? Click one of the links below to find out: