At Gritty Press we believe each sunrise offers the promise of new adventure, and we invite you to come along! So grab your compass and a pocketknife, fill that waterbottle, sniff the morning breeze, and whistle up a roving tune. Here we go!

Curiosity + Exploration = Adventure. Are you ready?

Gritty Press produces stories — of adventure, humor, happiness, courage, fortitude, strength, and more — for kids of all ages. (Yep, that means you!) 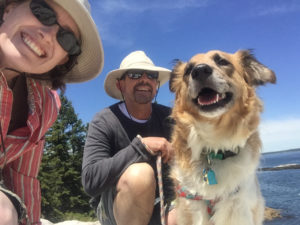 Jennifer Smith-Mayo is a professional photographer, videographer, and instructor whose work has taken her across the United States, throughout Europe, and to Africa and Brazil. She has photographed a number of books and calendars, and her work has appeared in numerous international and national publications. Jen teaches as an adjunct for the University of Maine and other institutions. She loves to challenge her cookery skills on all sorts of contrivances, whether it’s a double-chimney rocket stove, an induction plate, the campfire, an AGA, or a five-burner gas range. And so far she’s managed to keep her hubby, Matthew, in good vittles on the trail and at home. For the full lowdown on Jennifer’s work, visit: www.JenniferSmithMayo.com.

Matthew P. Mayo is an award-winning, best-selling author of novels, non-fiction books, short stories, and more. He has been an on-screen expert for a popular TV series about lost treasure in the American West, and has had books optioned for film. When he’s not wrestling grizzlies, Matthew and his wife, videographer Jennifer Smith-Mayo, rove the byways of North America in search of hot coffee, tasty whiskey, and high adventure. For more information, drop by Matthew’s Web site at www.MatthewMayo.com.

Miss Tess, aka Team Gritty Super Scout, roves on ahead, clearing the trail for the rest of the team, sniffing out all manner of potential dangers—squirrels, chipmunks, mice, moles, voles, and vampire bunnies. Miss Tess takes her job very seriously and will not allow herself to be swayed from the task at hand … except by a cookie. Or a nap. Or both.

Guy is a top-secret, triple-agent, ninja-cowboy-superspy-biker-multimillionaire with a taste for whiskey and bold adventure. He also starred in a series of high-grossing foreign films, but that’s all he’s saying about them at present. Don’t let his demure stature fool you—Guy is a master of the House of Kon-Tiki Flying Spin-Kick and will not hesitate to use it, should the need arise! Also, Guy rocks.

PS: No mountain trolls or unicorns were harmed in the making of this amazing website. Alas, an unspecified number of electrons were sacrificed.

SHERLOCK HOLMES AND THE FOLLY OF FLIGHT