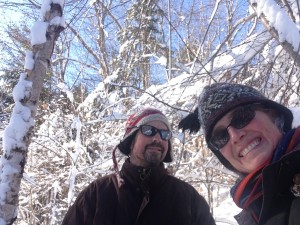 Team Gritty in the wilds of Maine

Where, oh where, has Team Gritty been? Ah ha! You mean aside from the 12 months of full-time roving all over the US map? Of poking and prodding and flipping over rocks in 40 states? Of cruising seacoasts and scaling peaks and fording raging rivers and trekking across snake-infested deserts? As it turns out, the latter quarter of 2014 and these early days of 2015 have been a time of further grand adventure and deep deliberation for Team Gritty….

Presented as we have been with unexpected opportunity, we chose to alter our plans of full-time travel and once again establish a home base. This new Gritty HQ is in a secret location, deep in the wilds of Maine. It is a place of infinite possibility for exploration, a place where Sasquatches have been seen, a place where mighty old-growth trees shade rushing rivers, a place where ghosts of the past keep an eye on incursions from the present…. 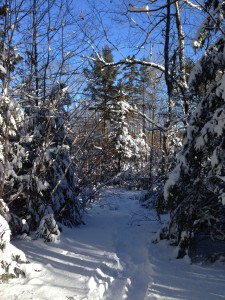 A Sasquatch may have been sighted near these woods.

From this new Gritty HQ, Team Gritty will continue to travel, though our treks to the world’s wild places will be of the more focused variety. Already the 2015 Team Gritty travel calendar is filling up with planned trips to the Northern Rockies and … elsewhere.

At present, buried as we are under freakish dumpings of snow, Team Gritty is concentrating on unveiling a whole batch of Gritty Goodness in the coming months … devised and built right here at the new Gritty HQ. You have been warned…..