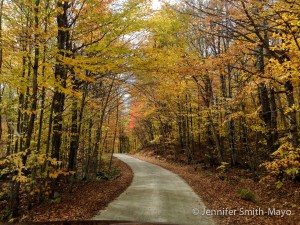 Hoo-wee!—it’s time to catch up! In late August Team Gritty decided to go for an autumn ride…a long, long ride. From Bozeman, Montana, we pointed Snowy the Tiger in a northeasterly direction and struck out on a 3,000 mile journey to admire the autumnal changes throughout the upper Midwest and Great Lakes, the Adirondacks, and northern New England. And while we admired the sites, we did some research, too.

Team Gritty L-O-V-E-S this time of year: Foliage so brilliant it warms up our faces (or maybe it’s the mulled wine), crisp temperatures that remind us why we have gloves on board, no bugs (die mosquitoes, die!), it’s sweater weather (yep, we dig our cashmere jumpers and, gasp, have even been seen sporting flannel), the sweet aroma of fresh-baked apple pie just begs us to loosen our belts (and the pie’s a whole lot tastier when we snag, er, pick apples from our friends’ tree), there’s the anticipation of the year’s first snowfall (but thank God we weren’t in Buffalo during the blizzard), oh, we could ramble on….

Now it’s the beginning of December and we’re wondering … where the heck the past few months went? After landing on the coast of Maine in October, we decided to extend our time here into the New Year, give Snowy a break, and rent a cottage in the midcoast area for a few months. It’s a welcome pause to be in one place for a length of time—especially as Jen has a bunch of photography/video assignments that require domestic and international travel and Matt is finishing a non-fiction book project.

During Thanksgiving, as we enjoyed filling our bellies with food raised by local Maine producers, we looked through Team Gritty’s travel journal from the past year. Here are some highlights from our most recent trek from Montana to Maine (and beyond!):

This Journey’s #1 Goal: Avoid the highways whenever possible! Visit out-of-the-way historic sites, roadside attractions, farmers’ markets and farmstands, and chat with folks we meet along the way. Two thumbs up for the quote from Charles Kuralt: “The interstate highway system is a wonderful thing. It makes it possible to go from coast to coast without seeing anything or meeting anybody” (from his memoir, A Life on the Road).

Ringling, Montana: Big bird sighting! Pulled Snowy over near the old Ringling church to watch a bald eagle soar and dive overhead for what seemed like an eternity.

Many Pines Campground, Neihart, Montana: Tiger in the trees! Snowy is dwarfed by towering pines in the Lewis and Clark National Forest. We chose a sweet, two-tiered campsite—had a staircase that led up to a picnic table and fire pit.

Makoshika State Park, Glendive, Montana: It’s late August and it’s hot, hot, hot in Montana’s badlands. Young bluebirds flittered around our campsite, one stood on top of Snowy’s tool box and peeked in the rear window. Hiked in the evening along the sandstone formations. It was much cooler and we saw fossil impressions of a Hadrosaur’s vertebra (duckbilled dinosaur). Arrived too late and left too early to visit the Visitors Center, dang it! Have to come back, missed seeing the T-Rex and Triceratops fossils.

After lunch, Guy chills out on the Leech Lake shore in Minnesota.

Minnesota: Stopped at an Amish farmstand in Mahnomen and bought homemade bread and cookies, and fresh-picked corn. Visited Paul Bunyan’s birthplace (and the local museum, loaded with PB info) in Akeley, then had lunch on the shore of … Leech Lake.

Amnicon Falls State Park, South Range, Wisconsin: Camped for the night, next day went for a hike along the Amnicon River, a rushing milk chocolate-colored stream. Waterfalls were roaring and the bowstring covered bridge (a Charles M. Horton-designed bridge, only five others are known to still exist) was a neat discovery.

Northern Great Lakes Visitor Center, Ashland, Wisconsin: Great place to stop, stretch the legs and stroll the nature trail, and load up on info about the area. Neat exhibits, films, and interactive displays that cover natural history, local history, and the Voyageurs.

Upper Peninsula (UP), Michigan: We crossed into the land of the Yoopers!


[clearboth]
Pictured Rocks National Lakeshore, Michigan: Sure this isn’t the ocean? Pebbled shoreline stretches on and on. Pebbles are in constant motion along the waterline as they are flipped, turned, smoothed.

Log Slide Overlook, Grand Sable Dunes, Lake Superior: In the late 19th century loggers slid logs down a dry wooden flume into the lake and then arranged the logs into booms to raft to Grand Marais’ mills. There’s no trace of the log slide anymore, just a crease in the sand bank with a 500-foot drop to the shore. Park sign: “Caution! Caution! Caution! Be aware…. Going down only takes a few seconds – coming up may take an hour or more. Rescue is difficult and may be delayed due to the distance from the local ambulance service or Lake Superior weather conditions….”

Lake Michigan National Forest Campground, Hiawatha National Forest, Michigan: Camped near the shore in the trees, maybe not such a good idea, big rain and windstorm made its way toward us….


[clearboth]
Mackinac Bridge, Michigan: More high winds and rain in the forecast. Picked up a couple of pasties and Yooper bars for lunch and waited out the brunt of the storm at Father Marquette’s Memorial. Drove across the bridge during the annual antique tractor parade—910 antique tractors crossed the Mighty Mac this year!


[clearboth]
Adirondack Mountains, New York: Foliage alert! We saw the first signs of autumn while driving in the Adirondacks. At Saranac Lake, Team Gritty spent the afternoon at the Robert Louis Stevenson Cottage, which houses a tremendous collection of Stevenson’s work and tells his life story. We had a great chat with the very knowledgeable resident curator, Michael Delahant.

Jen and her dad birdhunt in Vermont’s Northeast Kingdom

In 1829, Thomas Russell, an ambitious speculator, purchased five 100-acre lots at a tax auction. From lumber cut on the land, Thomas and his son Amzi built their homestead on one of the parcels.


[clearboth]
Kancamagus Highway, New Hampshire: Team Gritty camped at the Jigger Johnson campground (huge camp sites!) and rode our bikes to visit the Russell-Colbath Homestead, a historic house built in the 1830s by Thomas Russell and his son Amzi Russell. What a deal: In 1829, Thomas Russell bought this 100-acre property and four more like-sized chunks at a tax auction for $5.25.

And what a mystery: Amzi’s daughter, Ruth Priscilla Colbath, and her husband, Thomas Alden Colbath, inherited the family homestead. After chores one day in 1891, Thomas left saying he “would be back in a while,” but failed to return. Every evening for 39 years Ruth placed a lamp in a window for him. She died at the age of 80 and Thomas returned to the homestead three years later, but he never explained why he left and failed to return to her….


[clearboth]
Maine and Beyond: Team Gritty landed in Maine in late September. But during the next few months, our travels at times took us to separate places: In early October, Jen flew to England to work on a project and visit family and friends for a couple of weeks. Matthew camped with his brother in Franconia Notch in New Hampshire (lucky dogs, it was peak foliage!) before heading to Rangeley, Maine.

Back in Midcoast, Maine, we gave one of our series of presentations called “Why Not Now?” to a packed house at the Belfast Library. This particular talk focused on “Exploring a Life of Full-Time Travel.” Thanks to all who came out on such a stormy night!

Jen and Guy shoot video from the top of Carfax Tower in Oxford, England

Snowy chills out in Bayside, Maine


[clearboth]
With more approaching project deadlines and Jen’s work taking her to places such as San Salvador, El Salvador, and Cleveland, Ohio, we decided to rent a cottage for a few months in the historic village of Bayside, Maine. Team Gritty is enjoying typical late autumn coastal weather: Partly cloudy with rain, sleet, and sometimes snow. And Snowy the Tiger is patiently waiting in the driveway for the next adventure….