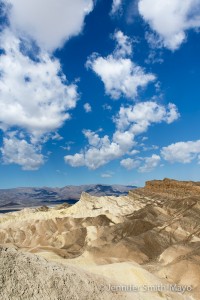 Research calls! In early April, Team Gritty left Anza Borrego State Park and headed to Death Valley National Park (DVNP) to research an upcoming book project. We only had time for a one-day visit—like an appetizer, it certainly whetted our appetites to return for a longer visit. DVNP is a land of extremes: It’s the hottest recorded place on earth (134-degrees F on July 13, 1913 at Furnace Creek Ranch), and in North America it’s the lowest elevation (Badwater Basin is 282 feet below sea level) and the driest location (average rainfall is less than 2 inches per year).

Team Gritty stayed at an Escapees park in nearby Pahrump, Nevada. We’re Escapees members and the SKP parks are the perfect place for us to stay when we’re hitting deadlines–or need to do laundry! We’ve stayed at quite a few SKP parks and we’re always amazed at the warm and friendly welcome we receive at the parks.

The wind blew hard during the drive in to Death Valley. On either side of the highway, dust devils occasionally rose up from the desert floor and slowly made their way to an undetermined destination. We passed through the DVNP entrance and stopped at Zabriskie Point to stretch our legs and take in the snowy mountain peaks along the Panamint Range (oh, and to take some pics, too!).

At the Furnace Creek Visitors Center, Team Gritty toured the exhibits, picked up our day pass, stamped our National Park Passport book, and on the way out we topped off our water bottles at a handy filtered water dispenser station. Our next destination was Scotty’s Castle, in the far northern region of the park. 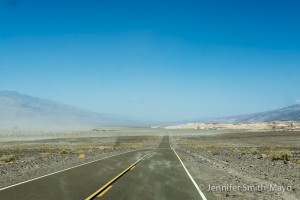 Built in the 1920s, Death Valley Ranch, known more commonly as Scotty’s Castle, is a 25-rooom Spanish-style villa located in an oasis in Grapevine Canyon. To this day, most folks believe the castle was built by con man Walter Scott (known as “Death Valley Scotty”). Scotty claimed that he was the owner and used his fortunes from his secret gold mines to build the villa. The reality is that the vacation home was engineered and funded by Scotty’s business partner, Chicago millionaire, Albert Mussey Johnson.

The great room in Scotty’s Castle

An oasis in Death Valley!

Death Valley Scotty was famous for his tall tales and sleazy business practices. In one of his most unscrupulous dealings, Scotty conned Johnson into buying into his “secret” gold mines in the Death Valley region … gold mines that never existed. Johnson was outraged at being deceived, but the millionaire had developed a real affection for the larger-than-life character of Death Valley Scotty and the two became lifelong friends. 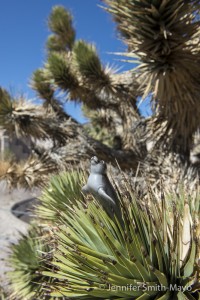 Guy hangs out in a Joshua Tree at Scotty’s Castle

By the 1930s, word spread of Scotty’s mansion in the desert, and many people—including Norman Rockwell, Betty Grable, and Will Rogers—visited to the castle. Much of Johnson’s fortunes were lost during the stock market crash of 1929 and during the Great Depression. Construction at the villa was never completed—sections of the castle remain unfinished, including the swimming pool. As a way to produce an income, Albert and his wife, Bessie, rented select rooms to vacationing guests. When Scotty was in residence in “his” castle, he entertained visitors during the day with tall tales including stories from his adventures as a former rough rider in Buffalo Bill’s Wild West Show. In the evenings, Scotty snuck away from the opulence of the castle and slipped down to his own humble abode that the Johnsons built for him at Lower Vine Ranch.

Team Gritty went on a living history tour of the inside of Scotty’s Castle–highly recommended! After touring the castle grounds, Team Gritty drove back toward Furnace Creek. We stopped at Harmony Borax Works, a site listed on the National Register of Historic Places, which hosts an impressive 20-mule team wagon and the remnants of the borax plant.

As Team Gritty drove back to Pahrump, we talked at length about planning a return trip because there are many more places to explore in DVNP—canyons, ghost towns, springs, salt flats, volcanic craters, and so much more!

Next up: Team Gritty will have some interesting news to share next week….