Whistling Along in Glacier National Park 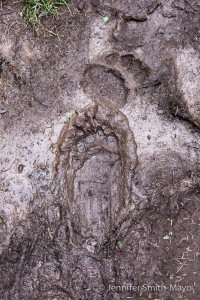 “Yep, wandering around by the lake and the trail. We met a park ranger and she said the bear’s young,” said Matthew.

“Oh my gosh, that means there’s a mother bear, too!” said the mom.

“Not necessarily—the ranger said it was a young male,” explained Jennifer, “out exploring the area on his own. She recommended we make noise to scare him away.”

“Oh, and as you hike a little further,” said Matthew, “look for a set of fresh, muddy bear prints where the trail drops down. They were made just a short while ago.”

The young fellow’s eyes grew wider and as they hiked past us, he licked his lips and whistled louder….

[clearboth] In mid-August, Team Gritty explored some of the natural wonders of Glacier National Park, west of the Continental Divide. We also had to catch up on professional work, which unfortunately cut into some of our adventuring time (as full-time travelers working on deadline, this is a part of the balancing act). But we did see some of Glacier’s awesome sites, hiked a few trails, explored Lake McDonald, and attended a ranger talk about the Park’s notable rascals.

The day we chose to take the free shuttle to Logan Pass and hike to Hidden Lake was rainy, foggy, windy, with an ever-present possibility of snow. Undeterred, the sun tried its darnedest to shine through the fog and clouds—a valiant but nearly fruitless effort. For Team Gritty, the myriad weather events made the hike even more exceptional. And an added bonus: fewer people were on the trail!

As Team Gritty hiked along Hidden Lake Trail, our eyes were drawn to the wild flowers in full bloom, their colors contrasted brightly against grey skies and snow fields. While the fog rolled past us at Hidden Lake (which lived up to its name!), we watched a mountain goat scramble down a steep mountain slope and disappear into the pines. The air was fresh, cold, pine scented, and moist, invigorating while we hiked, but soon became bone-chilling as we lingered over the jaw-dropping scenery.

The trail to Avalanche Lake—where we saw the fresh bear tracks—was another highlight during our time at Glacier. This popular hike begins at Trail of the Cedars, an accessible boardwalk that winds its way through a lush forest of ancient western hemlock and red cedars (some cedars reach heights of 100 feet and are more than 500 years old). At Avalanche Gorge Bridge, Team Gritty headed southeast on Avalanche Lake Trail.

The trail parallels Avalanche Creek, a stunning, glacial-blue stream that flows from Avalanche Lake and roars down through Avalanche Gorge. Surrounded by towering mountains on three sides, Avalanche Lake is fed by water cascading over rocky cliffs from Sperry Glacier (not viewable from the lake). Team Gritty paused at the sandy beach to take in the view and make a few photographs then continued on the trail to the head of the lake—the quieter end away from the crowds. This small mountain lake, or tarn, brimmed with activity. A heron and birds of prey flew over the shimmering water, fish leaped after insects dancing atop the water, and a young male bear surveyed new territory….

Until Team Gritty’s next report, remember: Keep it Gritty™.