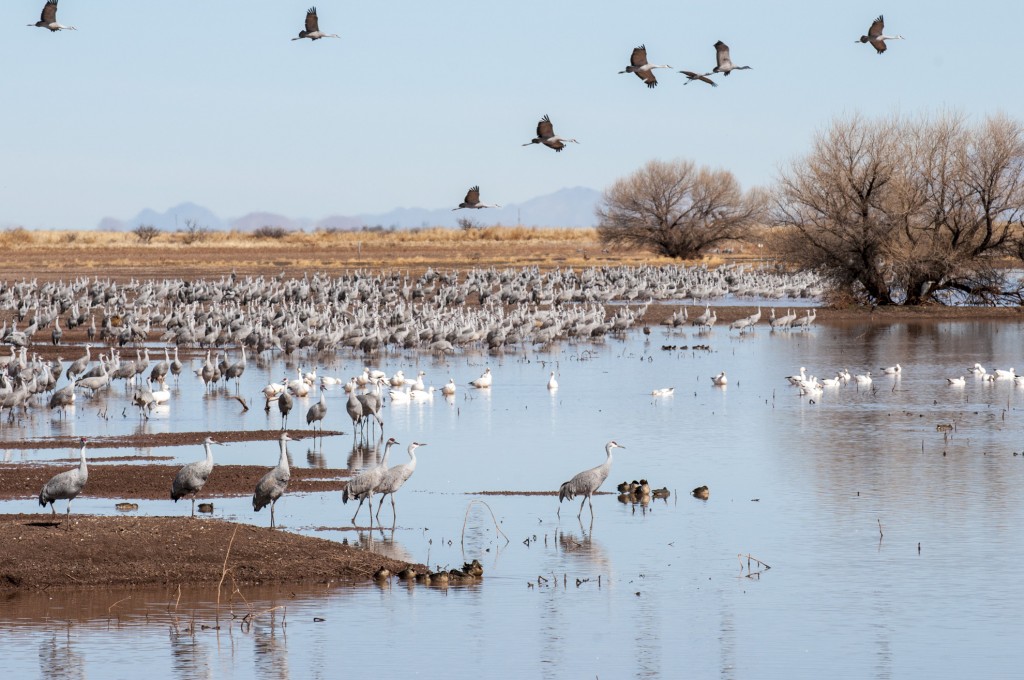 What does it look and sound like when more than 20,000 Sandhill Cranes soar into the air? Team Gritty found out on one of its latest adventures, this time to Whitewater Draw Wildlife Area in McNeal, Arizona….

The alarm clock buzzed at 4:15 a.m. Outside temperature: 28-degrees F in Benson, Arizona. Team Gritty flicked on the hotpot to make press-pot coffee, got dressed (layers—lots of layers!), grabbed the gear and grub bags, and fired up Big T to make the drive to Whitewater Draw in McNeal, about an hour and a half away.

At the Draw, the temp was 23-degrees F. Brrrrr! Donning headlamps, Team Gritty walked along the path to the North Viewing Platform which overlooks the McNeal Playa, a seasonal wetland. It was still dark out, visibility limited to a few feet.

After setting up the camera equipment on the platform, Team Gritty paused to take in the sounds of the Draw. Sandhill Cranes, ducks, a Great Horned Owl, and many other birds were quietly calling to each other. About 15 minutes before sunrise, the cranes’ chatter became louder … and louder … and louder … and then all of a sudden, flock after flock of cranes lifted up and soared into the air. They left the playa for the neighboring fields to forage for corn, wheat, milo (maize), barley, and oats.

Around 8 a.m., Team Gritty hopped in Big T and toured the neighboring cornfields to observe the cranes as they poked around in small groups. One member of each group seemed to be the trusted guard, constantly scanning the field for predators. Team Gritty also watched hawks glide across the fields in search of prey and marveled at the large flocks of sparrows who flitted from fencelines to bushes to the tops of grasses. Taking a cue from the birds, Team Gritty made a breakfast stop at The Last Stop Cafe in the small town of Elfrida (homemade donuts and tasty breakfast burritos, giddy up!).

Midmorning back at the Draw, the numbers of birds—and birdwatchers—increased dramatically. By about 11 a.m., the majority of cranes had returned to the playa. Team Gritty also spotted Snow Geese, scores of ducks, shorebirds, doves, thrashers, sparrows, a heron, a Great Egret, and in the picnic pavilion, a Great Horned Owl. The sheer number of cranes was a breathtaking sight—thousands and thousands of cranes stood there right before our eyes.

Some of them traveled to Whitewater Draw from as far away as Siberia, Russia. (And we thought Maine was a long way away!) Each autumn 50,000 to 60,000 Sandhill Cranes migrate from the northern United States, Canada, and Siberia, Russia, to the Sulphur Springs Valley in Southeastern Arizona. More than 20,000 cranes spend the winter months in the southwestern part of the Valley in Whitewater Draw, which the Arizona Game and Fish Department (AGFD) says “is now the best sandhill crane-viewing site in Arizona.”

Considered the “Valley’s crown jewel” by the Southeastern Arizona Bird Observatory, Whitewater Draw is located on Coffman Road, between the towns of Bisbee and Elfrida. The AGFD bought the 1,500-acre property (formerly known as Hyannis Cattle Company) in 1997 to “provide habitat for waterfowl and Sandhill Cranes and wildlife viewing and hunting opportunities.” Amenities at the Draw include a dry camping area, a parking area, public restrooms (vault toilets), a picnic pavilion, walking trails, interpretive signs, lots of benches, and two viewing platforms with binoculars. Whitewater Draw is definitely worth the trip … and Team Gritty will return!

For more details about the Draw, including directions, trip planning, maps, and lists of wildlife species, check out:
Arizona Game and Fish Department
http://www.azgfd.gov/outdoor_recreation/wildlife_area_whitewater.shtml

For more info about the Sandhill Cranes in Arizona:
Wintering Cranes in Southern Arizona by Jon Friedman
http://wildbirdsonline.com/articles_sandhill-cranes.html