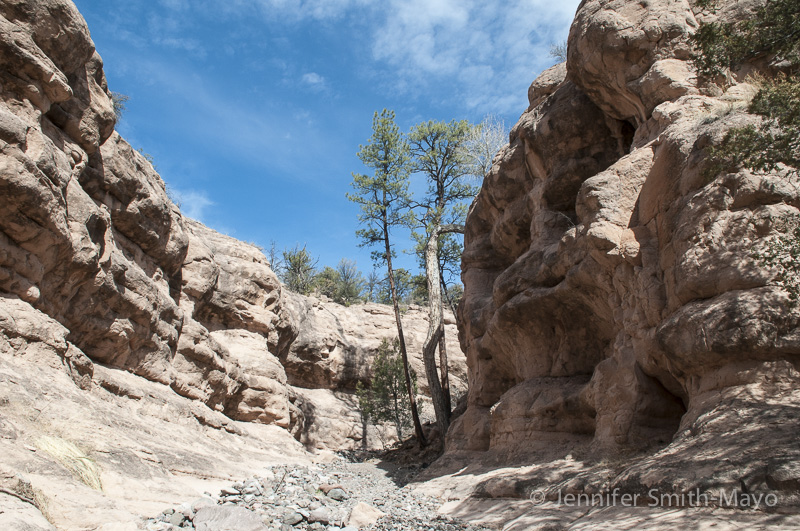 Team Gritty recently spent a few days hiking, exploring, and boondocking near Lake Roberts in New Mexico’s Gila National Forest (GNF). This forest is … huge! It’s the sixth-largest national forest in the lower 48 states, which the US Forest Service says encompasses nearly 3 million acres of public land and features “steep mountains, rough deep canyons, flat mesas, large river channels, and flood plains. The Rocky Mountains terminate in the Gila, as do the Sierra Madre mountains stretching north from Mexico. The Chihuahuan and Sonoran deserts reach into the Gila contributing their unique brands of plants and animals. From elk to gila monsters, aspen trees to prickly pear, the Gila is rich with biological diversity.”

Located within the GNF is the 558,014-acre Gila Wilderness, designated in 1924 as the world’s first preserved wilderness. Prior to the 1900s, grizzly bears, Mexican Gray wolves, now-extinct Merriam’s elk, and river otters thrived in the Gila Wilderness. Ancient Puebloans left evidence of their presence throughout the region via cliff dwellings, pictographs, petroglyphs, and pottery.

Aldo Leopold, who worked as a National Forest Supervisor in New Mexico in 1922, was instrumental in crafting the proposal to create the Gila Wilderness and protect it from further development. In 1947, in a draft foreword of Companion to a Sand County Almanac: Interpretive and Critical Essays, Leopold reflects, “Wilderness is the one kind of playground which mankind cannot build to order…. I contrived to get the Gila headwaters withdrawn as a wilderness area, to be kept as pack country, free from additional roads, ‘forever.’”

Donning daypacks and camera gear, Team Gritty set off for Purgatory Chasm Loop Trail in the Gila Wilderness. The trailhead was a short hike from the Mesa Campground, just across State Highway 35 from the Lake Roberts Picnic Area. We hiked up through Ponderosa pines, junipers, Piñon pines, and oaks, and onto a mesa overlooking the slot canyon.

MPM peers into the slot canyon

Frogs hibernate under the waterfall

Slot canyon view—can this really be the trail?

JSM vs the Ponderosa Pine

As we continued along the trail, a sign warned that the next section—about 1/4 mile—was not maintained. Undeterred, Team Gritty climbed down into the chasm and followed the the dry river bed. A cairn here and there helped guide the way. At one point the river had carved an S shape out of the canyon, and a sheet of ice remained on one of the north sides. A small pool under a waterfall demanded our attention, so we carefully made our way along the canyon shelf to have a look … and then we noticed the frogs. Three large frogs were hunkered down, hibernating in the deepest part of the pool.

Further down the canyon Team Gritty came upon flocks of birds—including Gray-headed Juncos and Towsend’s solitaires—flitting from the trees along the canyon down to a tiny pool for a drink in the river bed. We paused to watch them interact and also noticed paw prints in the sand which may have belonged to a large coyote or perhaps an endangered Mexican Gray wolf, a species recently reintroduced to the wilderness.

Back at the campsite, Team Gritty reflected on the beauty of the wilderness and how thankful we were that people such as Aldo Leopold had the vision to protect this important expanse of land. We also looked forward to the next segment of our adventure: The Gila Cliff Dwellings National Monument. Stay tuned!