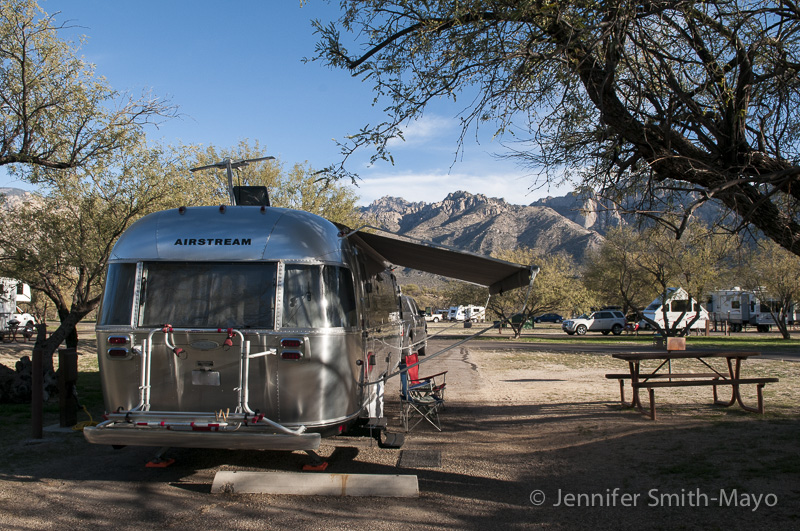 A week or so ago, Team Gritty pulled up stakes at the Lost Dutchman State Park and headed south to Catalina State Park, located on the eastern edge of Tucson, Arizona. We last visited CSP in late November 2013, and had hoped to return and explore more of the trails.

Team Gritty hiked the Canyon Loop Trail and the Birding Trail, both of which proved to be home to all sorts of flora and fauna. While trekking along the Canyon Loop Trail, we paused to watch a pair of Cardinals hopscotch their way through the grasses and bushes … and then, jump back! What’s that gurgling sound? (No, no, no, Team Gritty wasn’t knocking back whisky drams … yet.) We took a few steps more and there it was, a small stream of water flowing through Sutherland Wash. No wonder the birds and critters hung out here!

It’s been a dry winter so far for the region, especially in January. According to rainlog.org, Tucson has received no significant rain (0 inches). A local TV weatherman said that sometimes rain will fall, but it often evaporates before it reaches the ground. For an interesting comparison of the Sutherland Wash near the Romero Ruins Trail, check out the diptych of photos below that Team Gritty made nearly three months apart in November and January.

One afternoon we hiked over to the Romero Ruins Interpretive Trail to further explore the Hohokam and Romero Ranch ruins (our last adventure here, we ran out of daylight). At one point we spied a coyote chasing a jackrabbit through the desert scrub. And then a Gila Woodpecker hollered for our attention as he (or she) leapt from arm to arm on one of the biggest Saguaros we’ve ever seen.

Speaking of Carnegiea gigantean … along some of the trails we noticed “Adopt a Saguaro” signs in front of quite a few of these giant cacti. The Friends of Catalina State Park (FCSP) use “adoption fees … to support projects and activities at the Park such as the Nature Program, Saturday concerts, and volunteer appreciation.” Check out FCSP website for more details: www.Friendscsp.org.

Saguaro C12, part of the Adopt a Saguaro program

Team Gritty also caught up with mail (received a couple Xmas packages, awesome!), put a new Coleman stove to the test (boy howdy, we dig cooking—and eating—outdoors), and provisioned Ducky for the next journey…. Stay tuned!

(And for more Catalina pics, check out our Tumblr page.)