Adventures in the Superstitions 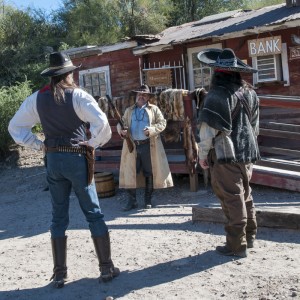 From shootouts to mountainside scrambles to enjoying some dang tasty campfire food, Team Gritty had a fistful of adventures in the Superstition Mountains in Apache Junction, Arizona, during the past couple of weeks.

Under the nearly full moon at the Lost Dutchman State Park, we joined 130 hikers on a ranger-led hike along the Jacob’s Crosscut Trail. The conditions were perfect: clear, dry, about 50-degrees F, with an occasional whoosh of warm air that emanated from the mountain sides. The hike ended with a big ol’ campfire and folks toasted marshmallows and listened to live music. During the hike, the ranger mentioned that the full moon hike is not only one of the Park’s most popular, but it’s been an ongoing event for more than 25 years. [clearboth]

The walls of the Superstition Saloon are covered with dollar bills and bills from around the world.

Mmm, a burger and fries….

JSM hanging out at the Superstition Saloon

Tortilla Flat, a remnant of an old west town, located in the Tonto National Forest in the Superstition Mountain range in Arizona

Canyon Lake, located in the Tonto National Forest in the Superstition Mountain range in Arizona

Team Gritty ventured up to Tortilla Flat (population 6), an Old West town that began life as a stagecoach stop in 1904. After dodging a few bullets during not one, but two shootouts, we quenched our thirst at the world famous Superstition Saloon. And rumor has it that a couple of burgers might have been consumed….

At the Lost Dutchman SP, Team Gritty hiked along a number of trails, including one that makes its way to the Flat Iron. “Trail is very steep and difficult … with a 2,000 foot elevation gain from Basin. Note trail is not maintained past the Basin,” reads the Park literature. Yes, indeed. We left before sunrise and as we made our way up the trail, we paused occasionally to look behind us and watch the shadows recede toward the mountains and reveal the valley way, way, below. The canyon, called Siphon Draw, woke up ever so slowly as the sunlight finally reached its way into the crevices. The hike was difficult, and at times a scramble. Team Gritty perfected a spider scramble technique, which we’re sure provided good entertainment for the surrounding wildlife. And a few new words were invented as well, as we slipped and slid on the rocks…. But the stunning views made it all worthwhile.

Cholla cactus in the Superstition Wilderness

At the end of the full moon hike, hikers toast marshmallows over a campfire

Team Gritty on the trail to the Flat Iron

Flowers bloom in the Superstitions

The evenings were full of long-lasting sunsets and coyote howls. One night, as Team Gritty feasted on campfire cornbread and big bowls of 13-bean soup, we were visited by a coyote who stood and watched us from our campsite’s edge. Perhaps it was the sweet scent of the cornbread, made from roasted cornmeal we bought in Burnt Cabins, Pennsylvania, and baked in the Dutch oven in the campfire.