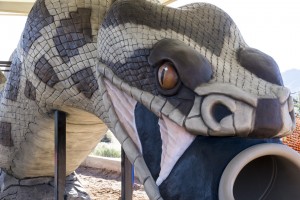 What? A 15,000-pound Western Diamondback rattlesnake at McDowell Mountain Regional Park in Fountain Hills, Arizona? Yep, you heard right! There’s a newly birthed, seven-and-a-half-ton rattlesnake—slide, that is—complete with a rattle tail spinner, in the park’s brand new playground. But that’s not all—there’s also a cactus climber, climbing boulders connected by a spider web, a cactus balance beam, and a stepping stone adorned with a rattlesnake, flowers, and a tarantula.

Team Gritty was at McDowell Park when the playground construction came to life—literally, we were camped just across from it—and of course, we had to find out what all the commotion was about….

Rand Hubbell, Park Supervisor of McDowell Mountain Regional Park, gave Team Gritty the lowdown. “This project came about because the playgrounds in the ten regional parks that the county manages are about 10 years old,” said Rand. “And at that point, you have to have a major refurbishing of the playgrounds, or replace them. We opted to replace them with some new, really unique sculptures that we think are different than you’d find in most of your neighborhood parks.”

(Boy howdy, he’s not kidding. Where were these cool playgrounds when we were growing up?)

“Each year we have about 80,000 visitors … and 10,000 of those would be kids,” said Rand. And since the new playground is located between the north and south campground loops, it’s ideally situated for most of the kids who come to the park.

Team Gritty talked with John Lund of Triple M Recreation, the Arizona distributor for GameTime, the playground equipment manufacturer located in Fort Payne, Alabama, who created the unique new playgrounds for the Maricopa County Parks. “There’s only one other snake, and that’s in Las Vegas,” said Lund. The new playgrounds are created to “blend in with the environment…. Some of the other parks have features like a mountain lion slide, or Saguaro cactus swings. But McDowell “is the only park that has a snake … as of right now.”

The sculptural elements are made of “reinforced concrete.” Thousands of pounds of concrete. “That part’s 9,000 [pounds] roughly,” said Lund, pointing to the rattlesnake’s mid-section. “And this part’s 6,000 roughly,” he said, referring to the front section. “Nobody’s going to pick it up and carry it off! These [climbing] rocks are several thousand pounds, and the cactus climber is, too.”

Jake Lambert of Premier Construction drives the second half of the rattlesnake’s to the playground.

A.J. Kimminau rakes and smooths some of the 200-plus yards of wood shavings while Jake Lambert gets another load.

Visitors check out the day’s progress.

Premier Construction, a general contractor and certified installer of GameTime products, is installing the Maricopa County playgrounds. Jake Lambert, of Premier, said the project has taken about two weeks to complete to this stage. “About a week of demo, and a week to install the project.” The last phase of the project is to “come back at a later date and paint,” said Lambert. They’ll remove the shades, paint the blue poles a color that better matches the environment, then reinstall the shades.

Nearby campers were certainly curious about the construction project. “Look at this guy, he’s over here checking out the cactus climber,” said Lund. “As word spreads throughout the campground, people are going to be coming by and checking it out.”

“It’s quite the eye-catcher coming up the road,” said Jerry Thomas, who works for Premier Construction. “I haven’t heard a single person all day until this [rattlesnake] was set up here. I’m from Tucson and they don’t really have a spot like this,” he said, referring to the park. “This is a very nice area, it’s immaculate and clean. I’m really impressed.”

Team Gritty certainly agrees, McDowell Mountain Regional Park is very clean and offers fantastic possibilities for hiking, biking, and enjoying the great views of the surrounding mountains. And we’ll admit, it’s darn good fun to spin around on the top of a rattler’s tail and slide out of its mouth. Now that’s gritty….