This just in! Gritty Press author Matthew P. Mayo was recently honored by the Western Writers of America with the prestigious Spur Award for Best Western Novel for his novel, Tucker’s Reckoning, for the USA Today Bestselling Ralph Compton Westerns  series (NAL/Penguin). 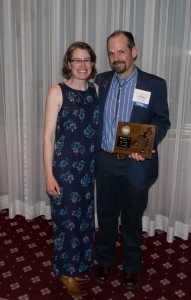 “To say that winning the Spur for my novel, Tucker’s Reckoning, is an incredible honor is an understatement,” says Mayo. “This recognition by my peers is one of the highlights of my writing life, made doubly special because of the top quality of the many other books considered.”

The WWA was founded in 1953 to promote the literature of the American West, and to present its famed annual Spur Awards for distinguished writing in the Western field.

In addition to Mayo’s Gritty Press titles (Roamer 1: Wrong Town; Winters’ War; Hot Lead, Cold Heart; and Two for the Trail), his other works include numerous novels and Western and New England-based non-fiction books, such as Cowboys, Mountain Men & Grizzly Bears; Bootleggers, Lobstermen & Lumberjacks; Haunted Old West; the best-selling Maine Icons (with his wife, photographer Jennifer Smith-Mayo); and a number of others, in addition to dozens of short stories, essays, and more.